Jewelry – the best gift for women

Some people are of the opinion that jewels, like perfumes, are too personal a gift to give to a woman and it is very difficult to get her one she would like. Regardless, jewels remain at the top of the ‘women’s favorite gifts’ list. Avoid buying jewelry only for a woman who wears gold and diamonds exclusively, unless you can afford it! In all other cases, keep the following few pointers:

– Hand-made jewels are preferable, because they are unique and special.

– Is the jewel meant for formal or everyday use, or both?

– Eco-jewelry is very in, especially for teenage girls or young ladies and women with a holistic/hippie world view.

– Seasonal jewelry – woolen for the winter and made from rocks and shells for the summer.

– If you do not want to shoot aimlessly, take the woman’s personal style and preference into account.

– An artificial pearl necklace is always welcomed and never out of style.

– Rings are the hardest to get in the right size, especially if they are not adjustable.

– Do not overlook the brooches. They are very fashionable this season.

Comments Off on Jewelry – the best gift for women

Jewelry– the best present for females

Comments Off on Jewelry– the best present for females

Things got a bit hot under the collar for a group of elderly women when they were visited by a couple of hunks.

Residents at Milton Lodge Care Home, in Essex, had been pleading with managers to grant their one ‘cheeky’ wish, to have their dinner served by a group of scantly clad beefcakes.

Well, their wish was finally granted when they were visited by ‘butlers in the buff’, who treated them to dinner and a show when they served the ladies a slap up three-course meal.

I was going to make a ‘meat and two veg’ joke here but I restrained myself.

But it wasn’t just the randy residents who got in on the action; 23 guests packed in for a sneaky peak, but only 11 were from the home – very clever. 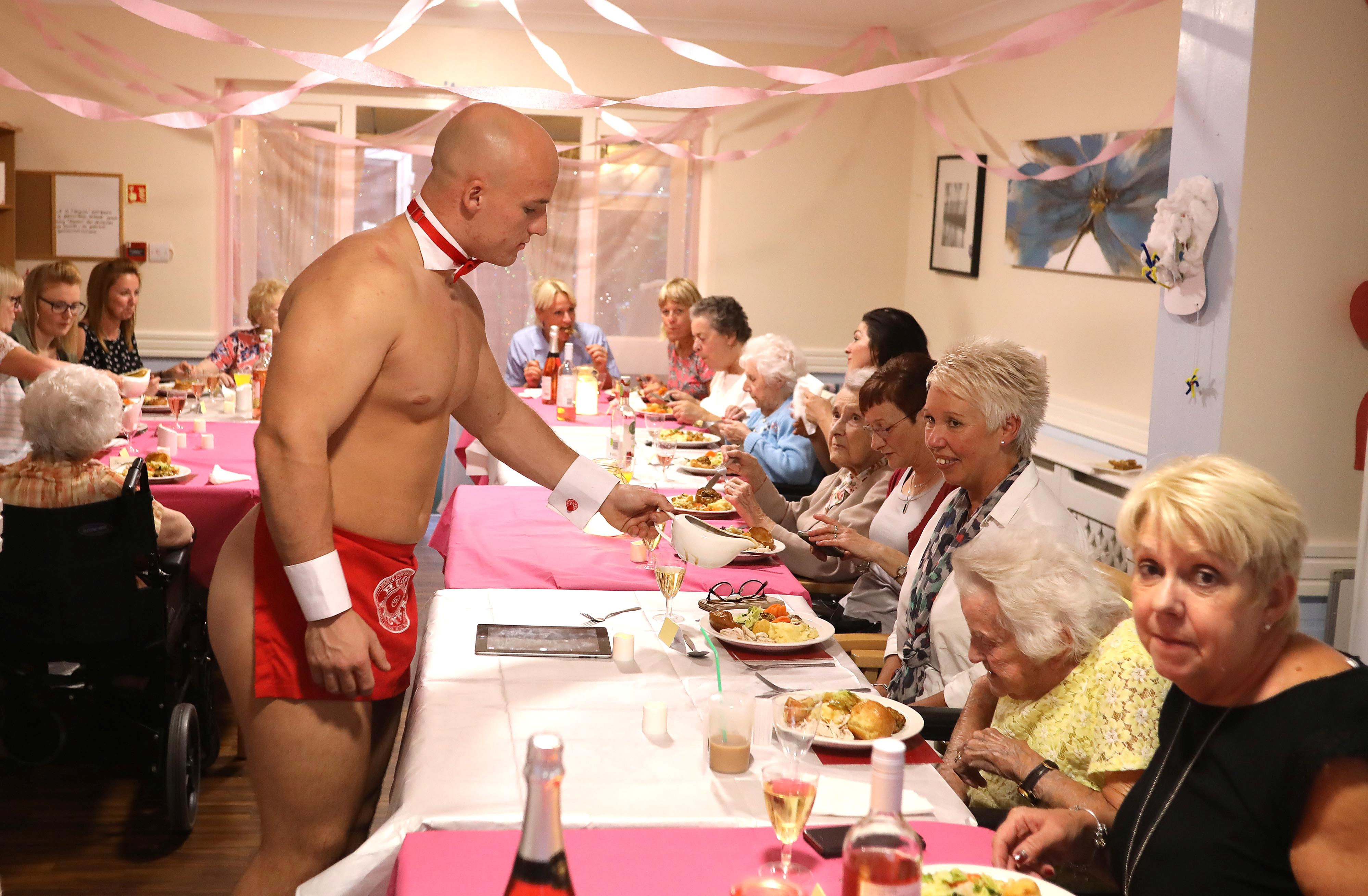 Claire Martin is the activities co-coordinator at Milton Lodge, and said 89-year-old man-eater Joan Corp was the ring-leader and showed you are never too old to have a bit of fun.

She said: “Whenever you ask Joan what she wants that day she always says ‘a man’.

“So we weren’t surprised when she wanted it to be her wish.

“We had a chat here and everyone was really keen to support it.

“We had a look online and found a company called Hunks in Trunks.

“When they turned up we had to let them know what we wanted them to do.

“They had a three-course meal with a roast dinner. The ladies’ daughters and granddaughters came. 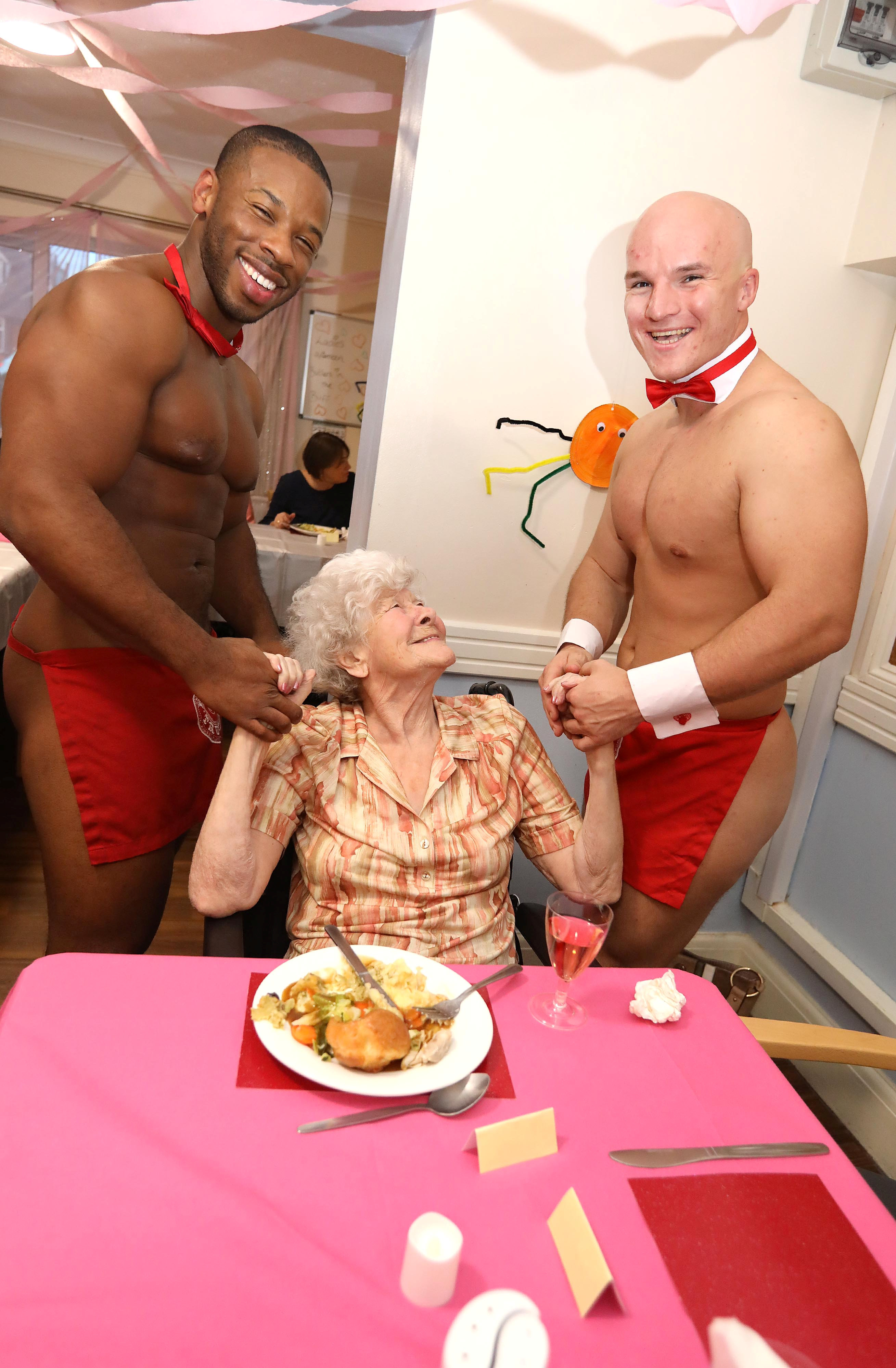 “We asked them to do some harmless flirting, it doesn’t matter how old you are, so why not?”

Safe to say the lads went down a storm with residents, especially with 99-year-old Doll Jenkins – the oldest resident at the home – who has already requested to have the butlers back for her 100th birthday.

Claire added: “The ladies were really excited, they had all been giggling and they dressed up.”

She said: “I had the front seat. It made quite a change and the boys done well.

“It was a good evening.”

But it wasn’t just dinner, the hunks took a real ‘hands on’ approach to their job, and offered the women some relaxation therapy.

Claire said: “They all had a massage, the butlers went around asking the ladies if they wanted a massage and they all said yes.

“After it had all finished, Doll told the staff she wanted them back for her 100th birthday, so we are going to have them back.

“They didn’t stop laughing the whole night, they absolutely loved it.”

Milton Lodge retirement home in Colchester runs a Sparkle initiative, where staff raise money to grant the wishes of residents.

The entire graduating class at a Pennsylvania middle school was gifted bulletproof backpack plates as they prepare to head to high school next year.

Cat Figures Out Owner Does Not Enjoy Her Live Gifts, Starts Bringing Giant Leaves Every Morning

said about Baloo in an interview with the Dodo.

Baloo is not just any old cat however. She quickly figured out that Ben has other tastes in gifts, and went out to hunt for something nicer, something less…alive. “It took a couple of months of me rejecting her gifts for her to start bringing me leaves. They were always big, nice looking leaves,” Ben said. “It was such a relief from the live mice every morning that I would show my gratitude by taking the leaf and playing with it while she sat on my chest.”

“She knew she was doing something right now.”

Proving herself to be an unusually intelligent and empathetic cat, Baloo carefully selected only the best leaves for her lucky owner, much to the relief of the local wildlife. These days however, she has found lazier ways to show love for Ben. She will comfort me when I’m feeling down,” Ben told the Dodo. “She’s not a lap cat by any means, but when I’m upset or nervous she will hop up onto me, push me back so I lay down and then she’ll just sit on my chest purring like mad and nuzzling my face with her nose. She’s a very loving cat.”

Scroll down below to see Baloo in action, and share you own cat-gift experiences in the comments!

This is Baloo, a cat who couldn’t quite understand why her owner Ben was rejecting her thoughtful gifts of live rodents and birds “She always looked so confused and sad, which made me feel pretty bad”

So Baloo decided to try a different tactic

She figured out that “after a while, it started getting a bit annoying having half dead animals dropped on your chest every morning”

Sometimes she would bring a twig instead of a leaf, just to mix it up

But these days, she has found lazier ways to show love for Ben

“When I’m upset or nervous she will hop up onto me, push me back  so I lay down…”

Comments Off on Cat Figures Out Owner Does Not Enjoy Her Live Gifts, Starts Bringing Giant Leaves Every Morning

Electrician Fixed The Heat For Struggling Couple And Gets A Surprise

Stacy and also Josh Lemonds were down on their luck when their warm headed out in the middle of a rough wintertime. So, the battling couple prayed to God for assistance and a kind-hearted electrical expert repaired the warm totally free. Yet that’s not where this real-life act of generosity tale ends!Anyone that’s

ever before had trouble making ends satisfy knows that’s precisely the moment points fail. Stacy and Josh Lemonds of Oklahoma City were both out of work when their heat went out.

With frigid temps and also no loan for repairs, it was a hard area to be in. And so, the Christian pair leaned on their faith.

The couple asked their church marriage group to join them in hoping. Which’s when Joshua Matthews reached out.

Joshua is an electrical contractor’s pupil that takes place to live about 10 minutes from Stacy as well as Josh. He initially met the couple when his spouse fell ill and they showed up on his door with some meals.

Joshua truly has a slave’s heart. He formerly served his nation as a soldier, finishing 2 tours in Afghanistan with the 45th Infantry Division. However he also serves his buddies, church, as well as neighborhood every chance he gets.

So, when he heard of Stacy’s as well as Josh’s trouble, he reached out and provided to come have a look at their heating system.

Stacy’s and also Josh’s residence was built in 1945. As well as the old electric wiring offered all type of problems.The electrical company checked the couple’s meter and also established the original circuitry presented a major fire hazard. So, they reduced the pair’s electrical energy up until the issue can be dealt with. The problem was, Stacy as well as Josh really did not

have the cash to cover the repair work. Yet God currently had a strategy in play! Credit history: Youtube/KFOR Information Some participants from the church place Stacy and Josh up in a hotel. Meanwhile, kind-hearted electrical expert Joshua Matthews invested days working on their house till the wiring was dealt with. As well as he did it all free of charge!”He’s just an amazing friend and also a servant of God, he’s actually a slave, “Stacy said. Pair Techniques Electrical Contractor Into Returning To Their House As a result of Joshua’s kindness, Stacy and also Josh had the ability to return home. So, the couple coordinated with a regional TELEVISION news terminal

as well as fooled Joshua into returning to their home. However this time, they had a surprise for him! Joshua thought he was returning to the Lemonds’home for a reinspection. However really, Stacy and also Josh intended to provide him with a$400 Pay It 4Ward award! Through tears, Stacy offered Joshua with the present, telling him simply exactly how happy they were for his kindness. As well as seeing Joshua’s humble response to the surprise is touching. You can

inform he assisted with no hope or expectation for getting anything in return. We most definitely need more individuals like him!WATCH: Unique Thanks

After Electrician Taken Care Of The Warmth”Bear each other’s burdens, and so meet the legislation of Christ.” Galatians 6:2